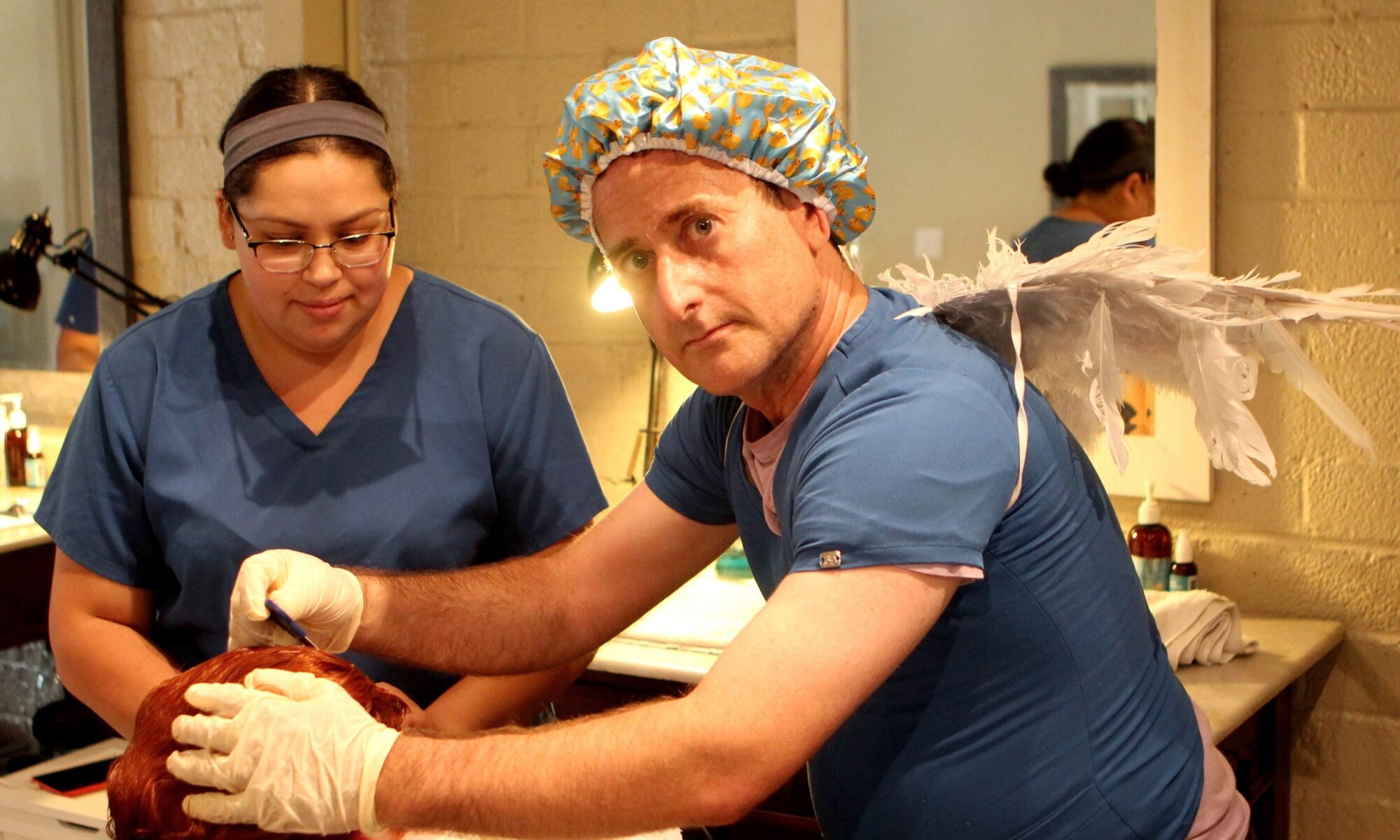 The comb I’m running through the hair of a 7-year-old boy has two sesame seeds on it. Both are dark brown and moving.

I have hated nit-picking before, but never like this.

“Comb at more of an angle,” I’m instructed by Bianca Ocon. “Front to back, then side to side.”

END_OF_DOCUMENT_TOKEN_TO_BE_REPLACED 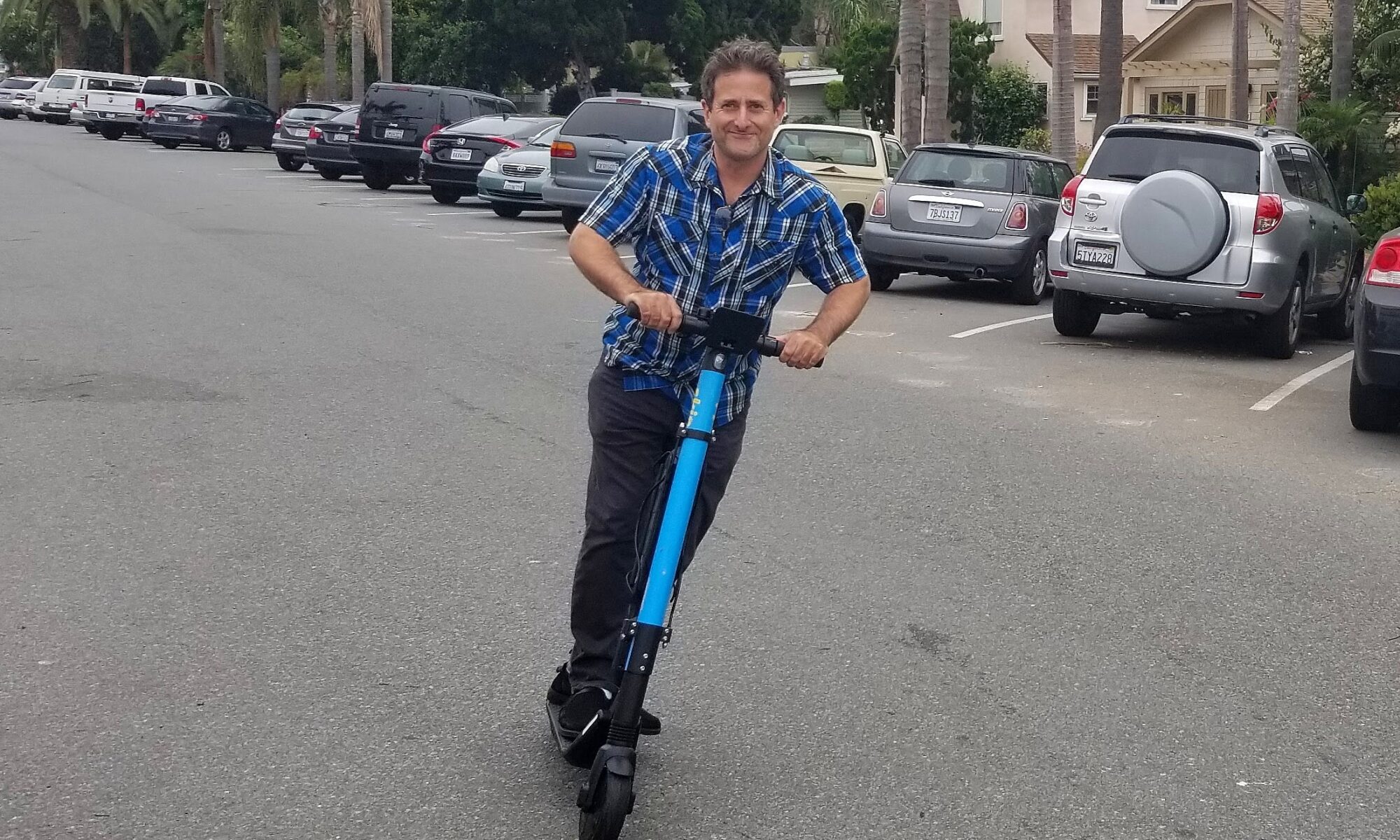 On the afternoon of Wednesday, July 17, a nervous middle-aged man engaged in alternating fits of screaming ecstasy and profanity while scooting around The Village at 15 miles per hour.

That man was me. Part of my job is covering the controversy caused by the hundreds of dockless electric scooters staged and discarded around La Jolla’s streets and sidewalks every day. So, my editor thought, why not personally experience what I report about?

END_OF_DOCUMENT_TOKEN_TO_BE_REPLACED 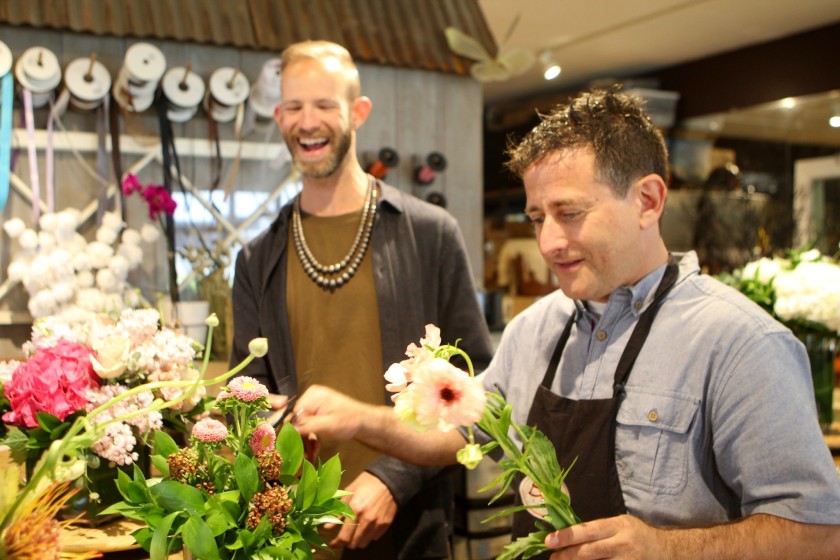 The last time anyone wants a yutz getting in the way at their flower shop is on Mother’s Day — the mother of all flower holidays. (Kristen Tebbetts, owner of Bloomers of La Jolla for the past 10 years, said it’s busier than Christmas or Valentine’s Day.)

Most of the three full-time florists at Bloomers, 7520 Eads Ave., worked from 9 a.m. to 11 p.m. on the Thursday and Friday before the big day, fulfilling more than 300 orders. The website was turned off on Thursday evening.

END_OF_DOCUMENT_TOKEN_TO_BE_REPLACED 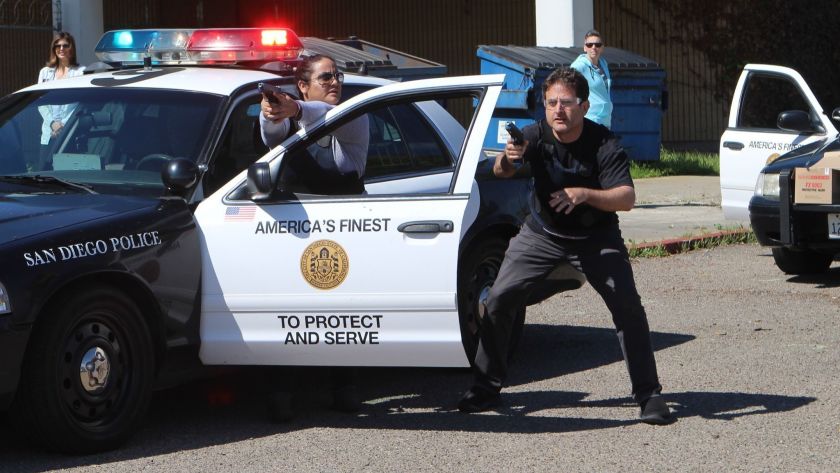 The suspect has been engaged by my partner and me. In the white sedan stopped in front of us is a male who matches the description of someone who, we were informed, just robbed a bank with a loaded gun, from which he fired several rounds into the bank’s ceiling.

As my partner calls for backup, I draw my gun and yell at the man to exit his car with his hands in the air.

END_OF_DOCUMENT_TOKEN_TO_BE_REPLACED 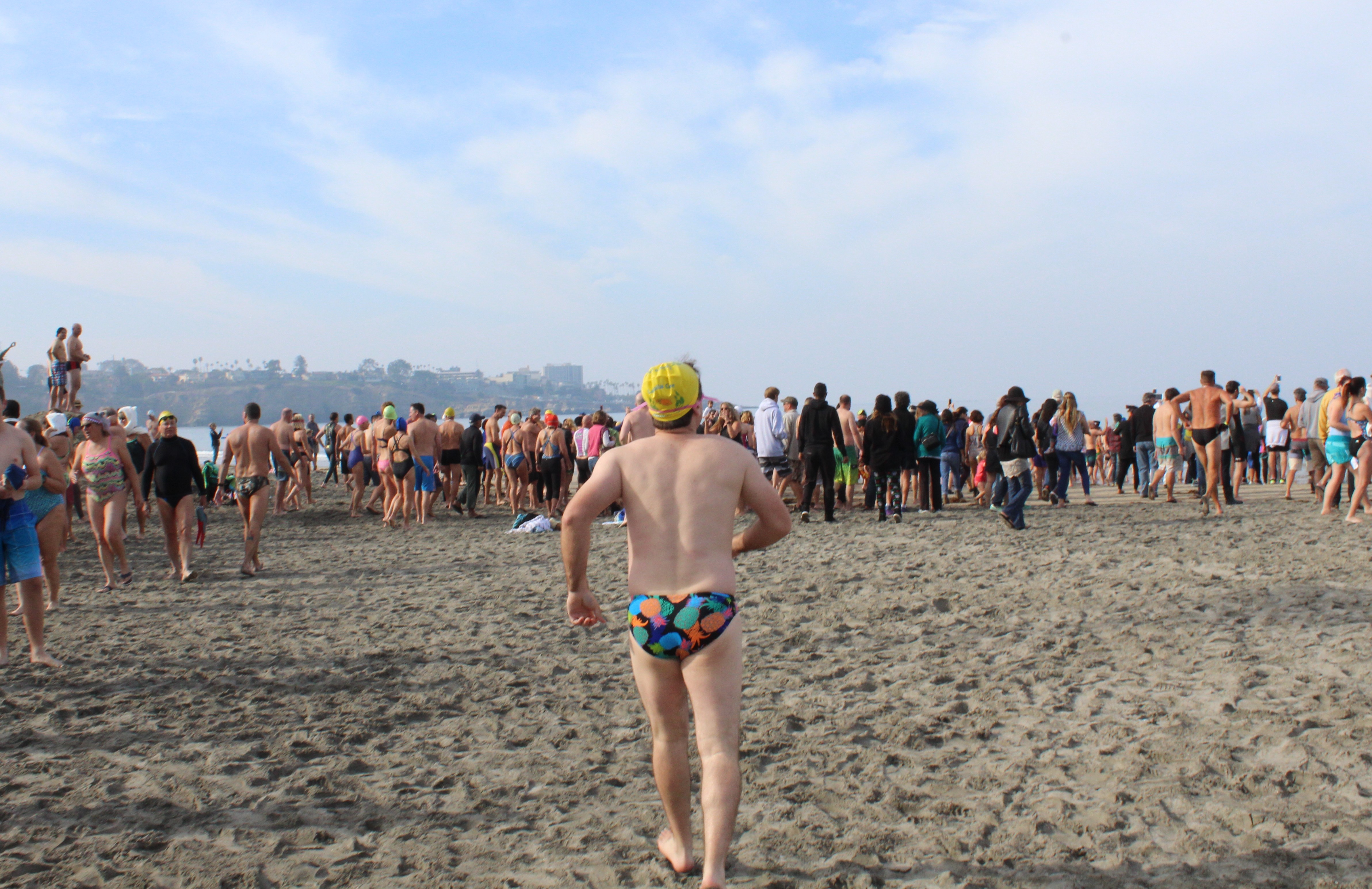 I wade slowly out into the Pacific from La Jolla Shores, my eyes on La Jolla Cove to the south. I have come to swim the mile there and back today, returning triumphant — like many of the real men around me at the 2018 Polar Bear Plunge.

The first hint I may be in over my head came earlier this morning, when La Jolla Swim Club member Bob West asked how I’ve trained. “A lot of pool work?” he asked. “Leg weightlifting?”

The entirety of my training, as I explain to West, consists of taking a cold bath last night and almost immediately switching to a hot shower in a panic. “Well,” West replied, “just get your head in the water and (expletive) swim then.”

Jumping into a cold ocean to kick off the new year has been a thing since millionaire health advocate Bernarr McFadden decided it should be in 1903 — something about curing New Year’s Eve hangovers and announcing the triumph of man over nature. His Coney Island Polar Bears still do it every Jan. 1 in their original New York location, where the water temperature usually hovers just above freezing. (This year, it was 37 degrees.)

The local version was launched in the mid-’60s by a group of divers — believed to be the famed Bottom Scratchers — who decided to plunge, wetsuitless, off the Children’s Pool sea wall. In 1993, the newly incorporated La Jolla Cove Swim Club took over the expanding tradition, moving it to The Shores after the surf proved too treacherous in 1998. Today, about 300 locals and residents gather at Kellogg Park to socialize until Steve Dillard blows his trumpet, indicating that it’s 10 a.m. and time to pose for a group photo and then hit the waves.

“I just thought it would be something fun and interesting,” said Richard Williams, a San Diego resident who plunged along with his wife, Janette, for the first time. (Newbies here are called “cubs.”)

“I’m originally from North Dakota, so I’ve swam in cold water before.”

Some donned costumes for the celebration, such as the fluffy polar bear hats San Diego resident Karen McCord and her friends ordered on Amazon. Or the wetsuit worn by downtown resident Brad Michaels that was just a wet suit. (Get it?)

Many of my Facebook friends wondered how much of an accomplishment a Polar Bear Plunge could really be in San Diego, where neither ocean nor morning air temperatures in January dip below 60 degrees. (“You mean the Koala Bear Plunge?” one mocked.)

McCord told me she felt similar pressure from outside the region. “One year, we changed the water temperature on the lifeguard sign to make it look like 38 degrees, so we had a little more credibility,” she said.

As I wade further in to the Pacific, however, nothing seems wimpy or melodramatic about the pins and needles stabbing my feet. Sixty-degree water sounds warm but still quickly attempts to lower your core temperature to an equilibrium with it. All around, people are screaming things like “I can’t feel my legs!” and “This is (expletive) cold!”

In fact, earlier, La Jolla Cove Swim Club vice president Doug Burleigh told me he knew of one swimmer who died of a heart attack about 15 years ago suffered halfway between here and The Cove. (He couldn’t provide any specifics, only that it wasn’t during a Polar Bear Plunge.) By the way, Burleigh took one gander at me and declared that my pineapple Speedos ($30 at La Jolla Swim and Sport) would not suffice for an attempt to swim all the way to The Cove and back. I required a swim cap so that the heat won’t escape my head — and those just happened to be for sale at his club’s booth for $10. (Good thing I remembered to bring my first-grade daughter’s pink swim goggles, because $40 was all I was spending on this story.)

Most plungers splash in the water for just a few seconds, then run back out, screaming and patting their stomachs with towels — before patting their backs with social-media photos of their bravery. For more serious plungers, swimming toward a white marker about 25 yards from the shore is popular. But I am a warrior. I stare at The Cove, ignoring the screams of the weak and calling upon the sea gods for stamina. When the water approaches my waist, I dive. My mind is fully prepared. This is going to happen.

Unfortunately, my body did not consult my mind beforehand. About 20 strokes is all it will provide before nearly running back to shore without me. The needles in my feet are now a thousand daggers stabbing all over my body, and I can’t be sure, but I think I just saw Jack and Rose from “Titanic” float by on a door. Shock, it turns out, is not so much fun.

Of course, the only thing worse than returning to the launching pad of your mission a failure, fewer than six minutes later, is seeing the people to whom you boasted about your mission heading out to accomplish their own. “Nice job,” says Burleigh, who slaps me an emasculating high-five as he begins a 2.5 mile round-trip swim that will take him in several circles in front of the Marine Room. (Burleigh gave his age only as “over 60.”)

At least I’m not as cold as I thought I would be. I feared a bone chill that would last days. Instead, it lasts mere seconds in the 70 degree sunshine. I suppose it’s still better to live in San Diego without credibility than in Coney Island with it. 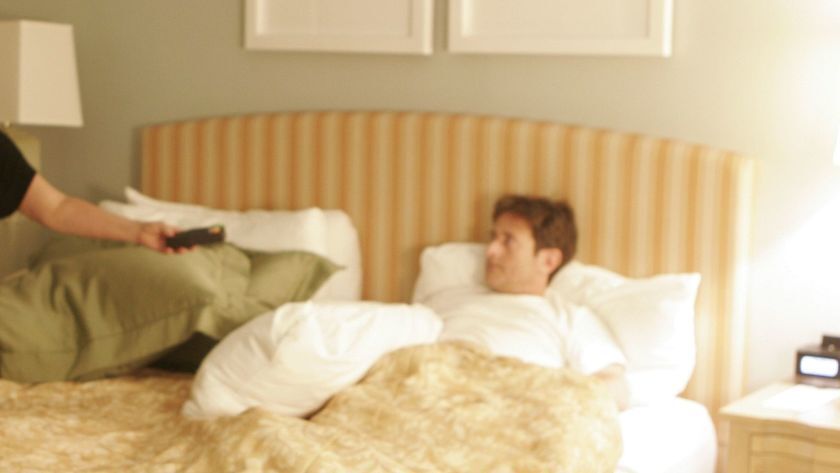 The entity had a message for those of us occupying Room 508 of the Grande Colonial Hotel on Sunday night. Uttered in a voice like Stephen Hawking’s synthesizer, that message was “RUN.”

Maritza Skandunas, founder of San Diego Ghost Hunters, and her colleague, Peter Gieblewicz, responded by laughing. They said they hear stuff like this all the time. “Lots of spirits enjoy playing pranks,” Skandunas said.

END_OF_DOCUMENT_TOKEN_TO_BE_REPLACED 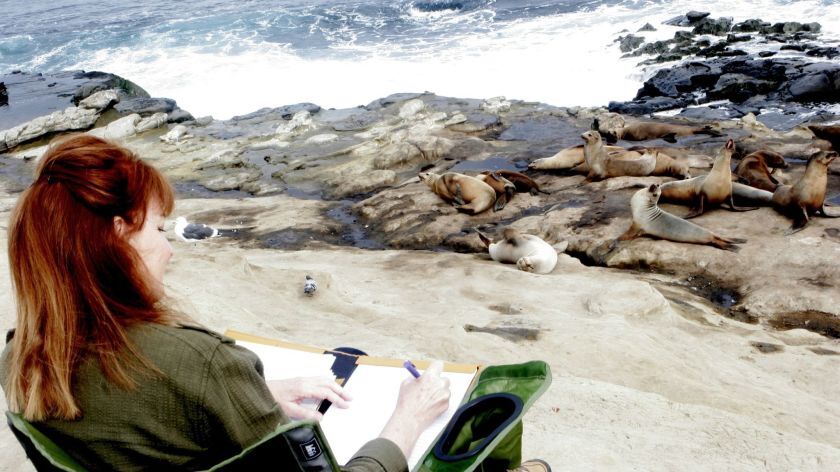 Brigitte Noel sits on a portable chair on the rocks at La Jolla Cove, Sept. 19. She concentrates on a male and female sea lion surrounded by pups.

Lots of voices have chimed in on this hot-button La Jolla issue. One that’s decidedly missing is that of the sea lions themselves. Noel, an animal psychic, agreed to try opening a channel.