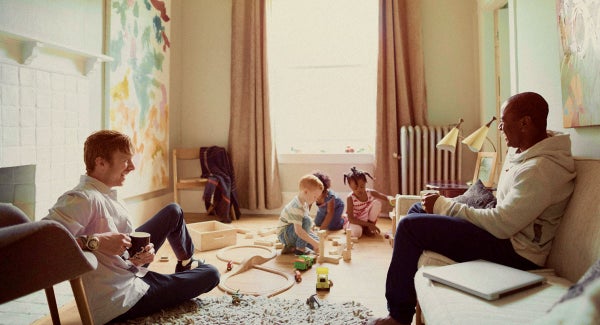 Before our daughter, I had a tight-knit circle of about a dozen male friends. This was in Las Vegas, where my wife and I lived for 11 years. They were artists, casino executives, and other writers. We hosted parties for them and their significants at our house and attended poker nights at theirs. We went out to dinner after work, then drinking and gambling until early the next morning. Four of us who worked for the same newspaper even formed a band. We played classic rock covers at bars and weddings.

After our daughter, large chunks of that circle began breaking away. I promised my friends nothing would change, but their suspicions proved correct. But having someone in your house who can die at any given minute due to something the law would hold you accountable for, that’s kind of a decadence-damper for me. I love my daughter, and I love being a dad. And, frankly, I couldn’t afford the $60 for a sitter, or the emotional penance for making the wife babysit. Our band stopped playing gigs and only got together to rehearse every three or four months.

Last year, my wife and I relocated — not long after our daughter started applying her newfound reading skills to the hooker billboards that pulled up next to us on Las Vegas Boulevard (“Daddy, what does ‘Girls Straight to Your Room’ mean?”)

Now we’re in San Diego. We’re all happier, but I’m not in one important way. My broken friend’s circle is now a nonexistent one. And, as a freelancer who works from home, no replacement circle has managed to materialize below the balcony I sit out on for seven hours a day until picking our daughter up from school. My wife tells me I can get away for one night a week to do some male bonding if I want. (“Please just get the eff out of my face already!” is how she lovingly phrases it.) But, after more than a year, there’s still not one guy within 300 miles I know well enough to grab a beer with.

I don’t need full-on keg-tapping, football-watching, wife-complaining man-cave time. I don’t even like football. I just need a dude to quote Anchorman and talk about the stock market with, someone who will remind me of the me I was back when the only child depending on me was myself.

It turns out, we all need that. A 2014 study conducted by Germany’s University of Gottingen found that being surrounded by a group of other men helps us men relax, live longer, and feel less threatened by others. In fact, the study found it more relaxing than time spent with our wives and family. The study was conducted on macaque monkeys, not humans, but macaques have very similar social behaviors — especially to my Vegas friends Doug and Martin.

For the first six months in my new hometown, the only male friend I made was Nick, the clerk at the Shell station convenience store around the corner from our apartment building. And I only got to know him because one day I bought 44 energy drinks that were on sale and then the boxes broke and they rolled all over the floor. Picking the cans up was our meet-cute.

One day, Sean the maintenance guy from our apartment building walked into the convenience store and started talking to Nick. All of a sudden, 100 percent of a building’s occupants in my new hometown knew my name. I was Norm from Cheers.

A few weeks later, however, Nick revealed something to me that crushed me like one of my energy drink cans: His name wasn’t Nick. It was Alex. I found this out after “Hey, Nick!”ing him for about the 100th time. “I tell people the wrong name sometimes,” Alex finally admitted, “in case they leave a bad Yelp review. Sorry man, it snowballed.”

Dude, what else have you lied to me about?!

Desperate, I registered with a stay-at-home dad Meetup but unregistered as soon as I received my first email invite and thought about it. It’s not that I see myself as superior to other lonely guys who stand around parks in name tags with their kids trying to seem cool and not desperate.

Okay, it is that.

My wife works in a busy office and interacts with people all day long, so she started making new girlfriends right away. She dragged me along to meet a few of their husbands at work parties. But to them, I will always be their wife’s friend’s husband. And that’s not a guy they can ever cut loose with or trust. That’s a spy. That’s the guy at the bachelor party whose report about what happened gets back to the bride.

Maybe I’m just playing hard-to-bond or something. But the only luck I’ve had meeting potential BFFs is through the friends our daughter makes at school. Brian’s daughter, Jenna, sits next to mine in first grade. We met each other at Jenna’s birthday party. Brian’s a cycling obsessive who bikes 30 miles every day. So, I told him I did, too. I feel tremendous pressure to make it work with every new dad I meet this way, to prove that I’m more than “Corey (Skylar’s dad)” even though that’s how they will always have me in their phone contacts.

I felt bad about lying to Brian. But I just got the feeling that all he had room for in his life was a cycling partner and beggars can’t be choosers.

Immediately, I went home and scoured eBay for the first bicycle I’d purchased since age 14. Which is how I discovered that ebikes were a thing that exists now, and that some look enough like regular bikes to, maybe, fool your first man-date. So I ordered one and painted over the portion of the frame that screamed: “ELECTRIC VEHICLE.” (This was actually an easier lie to get away with than showing up in my current lack of cycling fitness and trying to pedal 20 mph alongside a man so insane that he maps out precise cycling routes on an app, including stretch breaks and the time it should take him to arrive at each mile marker.)

Fortunately, as extraordinary as Brian was at cycling, he was less extraordinary at detecting strange hums emanating from your rear wheel every time you climb a hill with him. He had no idea I was motor-juicing.

After about a month, I bumped into Brian on our regular trail but not at our regular time. I was training on my own at this point, too, improving so much that I almost never engaged the motor anymore. I was even thinking about trading in my ebike for a fully human-powered model. Only Brian wasn’t alone. His 8-year-old son was biking with him.

“Cool electric bike!” the kid yelled at me.

It wasn’t that I was lazy and didn’t want to work out, I tried explaining. It was because – let’s see, how did they put it in the ebike listing? — I prefer options. The words coming out of Brian’s mouth claimed it wasn’t a big deal, but his eyes claimed otherwise. I actually did intend to tell him at some point, but it snowballed.

Holy crap, I was his Nick/Alex!

It ended. Four more lonely months of pretending to enjoy Taylor Swift videos with my wife and daughter later and my second man-date candidate entered the picture. Strangely, he was someone I met just by sitting on my balcony, since his apartment was directly across the courtyard from ours. (I knew our daughters were already friends from school, so I opened with that.)

He looked exactly like The Rock, except that he was short like me, so he called himself “The Pebble.” Every day, I’d prop my laptop on my patio table to write and we’d have chats – about life, women, our hobbies. I told him that I played guitar, and that I missed my old band. He asked what we called ourselves and I told him the story behind Jane’s Eviction. (Our keyboardist’s wife, Jane, sacrificed her living room for our permanent rehearsal space.) “Why don’t you just sit out on your balcony and play guitar?” The Pebble asked. “If I knew how to, I would.”

And so I brought my guitar out to the balcony and serenaded a dude. And I mean serenaded him. Tom Petty had just died, and I do a half-decent “American Girl,” so it was pure catharsis. Tears welled up in both our eyes. The distance from that special moment to grabbing my first beer together with a guy in more than a year was nonexistent.

The Pebble drove, because he had the bar in mind. We had some brewing differences to contend with right away. He likes IPAs, and I think hops taste like what happens when you accidentally bite into a Tylenol capsule. But he began ordering me Miller Lites without insulting my complete lack of beer taste, and he surprised me with a full head of physics and history knowledge while watching the Colts trounce the 49ers. All this and his appearance also proved highly beneficial when I started my usual fifth-beer debate with the patron next to me about the scientific plausibility of time travel.

The other guy wasn’t much bigger than Sheldon from Big Bang Theory. But you don’t need to be in order to realistically threaten to win a physical altercation with me. The Pebble told me I had enough, a correct assessment, and politely escorted me out while apologizing to Sheldon.

There was no way this wasn’t the beginning of a beautiful friendship. (Bicycle Brian who?)

My daughter had other plans, however. She was having a birthday sleepover party for only three of her many friends, none of whom were The Pebble’s daughter. I begged my daughter to change her selfish mind, to consider her father’s needs ahead of her own for once, but the die had been cast.

The Pebble’s wife got mad of course, and he stopped sitting out on his balcony. Not long afterward, The Pebble and his family actually moved. My daughter claims it’s unrelated, that they wanted to rent a house instead of an apartment. But I know the truth.