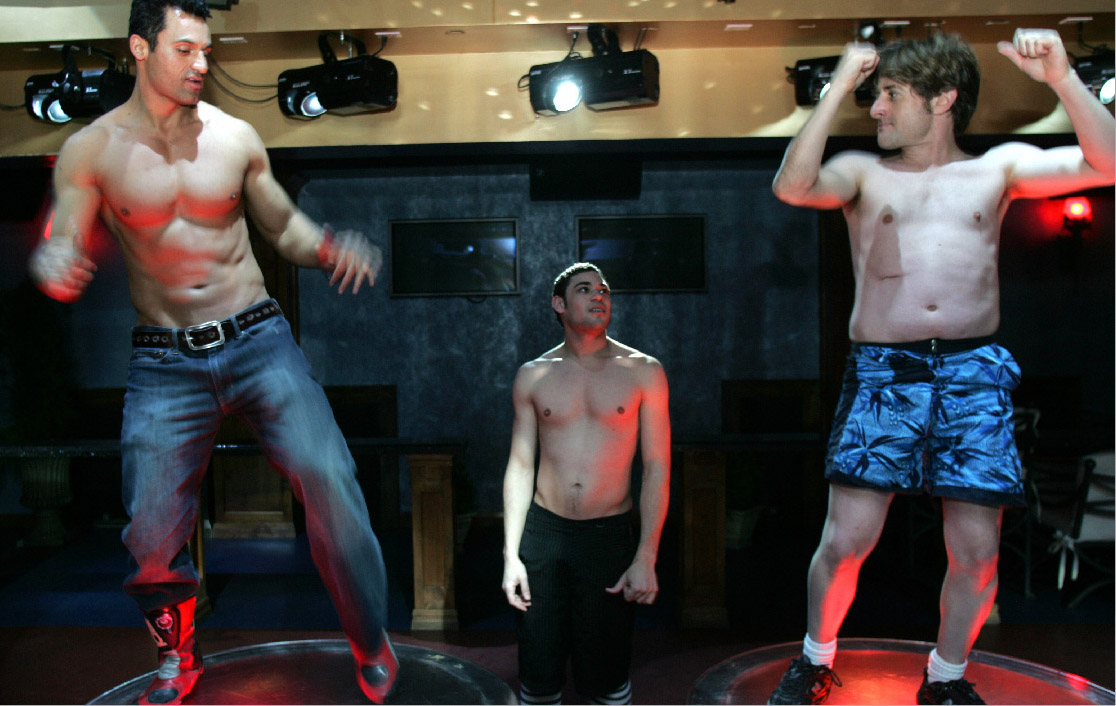 It's a good thing I'm getting married next month. These photos are going to kill off all my dating options for at least three years.

As one of nine go-go boys at the gay nightclub Piranha, it's my job to "fulfill the fantasy," as described by Carlos Salazar, the 34-year-old Las Vegan who trained me to replace him.

I can't imagine a single fantasy fulfillable by the sight of my jiggling atop a Plexiglas pedestal in low-rise briefs , but here I am.

Every weeknight, Salazar earns $135 by doing this for three hours (midnight-3 a.m.). And that doesn't include tips, which can surpass $100.

On Friday and Saturday nights, Salazar strips for women, either at Sapphire or Olympic Garden. He says he prefers that job -- not only because it pays double to triple the amount, but because he's straight.

"That is the first thing people here will ask me," Salazar said. "Don't get me wrong. Maybe if I was gay, I would like this better."

Go-go dancing -- which involves grinding suggestively in provocative outfits, but not stripping -- began in 1961, when female patrons did the twist atop tables at New York's Peppermint Lounge. Soon, girls were hired to do it. And by the time Hollywood's Whisky-a-Go-Go opened in 1965, they had their own cages to do it in. (Go-go boys began dancing in gay nightclubs at about the same time.)

"What are those?" go-go boy Curtis Goodman asks me.

I have just pulled off my sweatshirt in a curtained-off corner of Piranha's dance floor that masquerades as backstage. I thought the pink pasties would be a funny touch. I purchased them in Manhattan during the drunken festivities surrounding my bachelor party two nights ago. (That was the second hint I felt compelled to drop about my heterosexuality, if you haven't noticed.)

This wardrobe decision proves regrettable, because now Goodman senses that his alternative lifestyle is being mocked.

"If you're wearing pink pasties, you have to wear these to match," he says, handing me pink fishnet panties to wear over my black low-rise briefs.

Three other go-go boys stand around, their bare arms folded as though enforcing compliance, like the crowd that once gathered to watch bully Charlie Greenvald slap me in the face at my middle-school bus stop.

Next, Goodman hands me his white bondage belt and ties a black bandana where a man's bicep usually is.

"There," he says. "You want to be overboard?

Somehow, I escape before the ceremonial slathering of the baby oil.

"I'm quitting if he gets more tips than us," Goodman tells Salazar.

Piranha's is an apt name for this establishment. I feel like a chunk of raw meat tossed into the center of a tank of 200 hungry fish with teeth. They circle at first, curious perhaps about how I'll taste before they strike.

I begin with a light jig of my six-pack flabs accompanied by my subconscious white man's overbite. The injuriously loud dance music sounds to me like chalkboard being pile-drivered by a giant fingernail. But the beat is easy enough to keep. I follow the lead of Salazar, occupier of the adjacent pedestal.

When the music slows, Salazar raises his arms over his head like a Greek statue and poses.

"Now do this," Salazar says when the beat quickens again, whipping around in a circle traced by his bent right leg.

Salazar -- originally from Michoacan, Mexico -- moved to Salinas, Calif., in 1992, where construction and landscaping gigs began sculpting his body in a way dramatically different from how inactivity and Einstein's honey-wheat bagels have sculpted mine.

"So my friends started suggesting to me that I should start stripping," Salazar said earlier. "And I guess somehow that got me started thinking about it."

Eight years ago, Salazar went for an audition in Salinas, got the gig and, as he said, "never looked back." (His neck is too thick to, anyway.)

Salazar said that go-going and stripping help him save for his dream -- opening either a spa in Mexico or a restaurant/club in Vegas. He also said they connect him with people who might be able to help along the way.

"Or at least be a good sugar mama," he said, joking.

Suddenly, I'm go-going it alone. Salazar has de-pedestaled and an unfamiliar dancer introduces himself as Mateo. (The four dancers at Piranha rotate every 20 minutes, so two are always dancing together.)

"Get in your comfort zone," Salazar encourages me as he walks away.

My comfort zone is currently two standard football fields away and retreating fast. I wouldn't describe myself as homophobic. But that's under normal circumstances, when only my fiancee suspects that I might be gay. An entire room that's staring at my frilly pink groin and thinking that they know that I'm gay is another experience entirely.

"I don't care what people think," Salazar told me earlier, "as long as they don't grab my (expletive). Then I tell them to keep their dollar."

Speaking of which, along comes my first customer holding a George Washington folded the dreaded long way.

I execute a perfect waist swerve. Of all my moves onstage -- and I have two -- none is more important than the waist swerve. It is employed specifically to defend against the (expletive) grab or, in this case, the (expletive) dollar placement. Not only does this save my fishnetted butt, but the club's. Because it does not have an adult entertainment license, Piranha's faces a fine for any exposed naughty area, intentional or not.

The dollar-placer's name is Eric, he tells me. And I can't officially count him as a random admirer, because he recognizes me from the newspaper.

"I really liked you as a belly dancer," Eric says before hanging the dollar off my right butt cheek and kissing my left hand. (Incidentally, no stronger argument exists for sanitizing your hands after handling every dollar you're ever presented than pondering the distinct possibility that any one of these bills could be in your wallet right now.)

After 20 minutes, I have exhausted not only my two dance moves, but the gall it took to accept this assignment in the first place. I spot Salazar exiting the curtain and walking over. Finally, I'm being relieved of duty. I have never been so happy to see a mostly naked man in my life.

"No, you're staying up there!" Salazar yells above the pile-driving. "I just came by to see how you're doing."

I suppose an argument can be made, based solely on the photos accompanying this article, that it's impossible to embarrass me during one of these adventures. But even I can't accept the implications that present themselves when people who aren't R-J employees begin pointing their cameras and camera phones at me for long stretches of time.

With a face pinker than my panties, I run away at the first opportune moment -- just like the little girl I'm dressed as. Call me a go-gone boy. Only on prom night are women's underwear whipped off faster.

Heterosexual compulsions cross my brain -- to watch football, to crush beer cans against my skull, to run with bulls. First, however, I must count the tips. I received a whopping total of eight singles, six of which came from Eric.

"What happened?" Carlos asks through the lifted curtain. "You only worked 20 minutes. They were just starting to like you!"

This, I explain, pretty much sums up my objection to the situation.