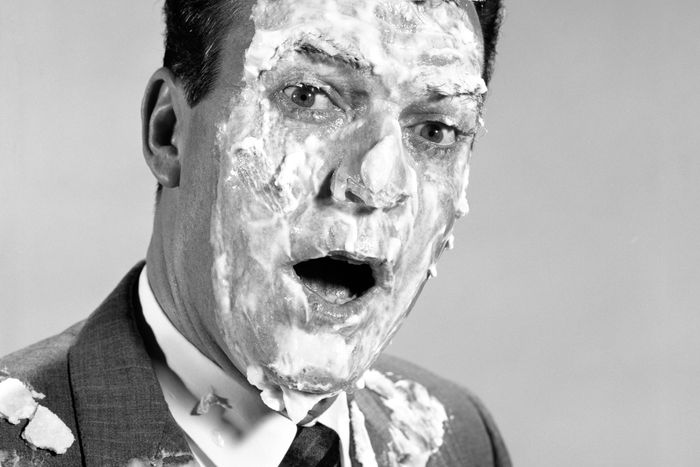 The fetish, which is called WAM (wet and messy) or “sploshing,” involves the smearing of food or another liquid or sticky substance all over a person’s body.

“Leave it on,” Rose’s roommate-videographer-director, Jen, tells me at one point. “It’s got to cling. They like the cling.”

The viewers will know the substance in the pie tins is shaving cream, not pie or even whipped cream, and they’ll be fine with that.

“I’ve vacuumed on cam before,” Rose says, “which is like, sure I’ll clean my living room. It needs to be done anyway.”

There was also the sliced-cheese guy.

“What he wanted me to do is to tear it into tiny squares,” Rose says. “And he specifically needed it to be sliced American cheese. But I was out, because my kids eat it. So I’m like, I have Gouda, Swiss …”

A fetish is defined by the American Psychiatric Association as the reliance on non-living objects, or non-genital body parts, for arousal and satisfaction. The most popular of several scientific theories advanced to explain the phenomenon is cross-wiring between the brain’s sex center and adjacent regions controlling other body parts and emotions.

Rose has her own theory: that fetishes are nonsexual activities experienced in childhood that, because of a pleasant or unpleasant association, take on a sexual twist beginning in puberty.

“Maybe getting told not to play with your food is how this one happens,” she says.

The guess is an educated one; Rose graduated from college with a psychology degree. “It helps me get into their mind-set and figure out what they’re looking for in a scene,” she says.

Rose won’t say how much she earns per year; however, she hints that the number could top six figures. “I just had a guy pay me $1,000 the other day,” she says. “But it takes time to build up, it’s not an overnight thing at all.”

“Should I put a bikini or bra on?” Rose wonders aloud. “A bikini might make it too bubble-gummy.” She opts for a demure blue dress.

It’s now two minutes before we roll. The walls and floor are lined with enough protective plastic for a Dexter episode. Rose and Jen confer, working out last-minute details — motivation, mise-en-scène.

The first idea — that I’m getting pied in the face after losing a bet — is voted down in favor of a concept more based in reality: I’m a reporter for a magazine seeking to interview Rose, who demands I get pied in the face first.

By my fourth face pie, having learned to quickly clear nostril holes into the foam, I begin enjoying the experience a little. Maybe more than I want to admit. In fact, I won’t lie – I notice myself chubbing up. By the double-whammy of pies No. 7 and 8, I resemble a slightly puffed Stay Puft Marshmallow Man. It hardly feels like punishment anymore.

I can’t pinpoint exactly what’s so arousing about it – being cackled at by a hot babe, being in my underwear while she and Jen are fully dressed, or being on camera. Or maybe it’s the memory of the cover of Herb Alpert’s Whipped Cream & Other Delights in my parents’ record cabinet.

In a 2011 study published in the Journal of Sexual Medicine, 24.5 percent of men reported engaging in fetishism, with 30 percent saying they fantasize about it. The World Health Organization says fetishes are common and only pose a problem when they impede normal sex or cause distress.

So I guess it’s cool, then, to come clean and admit mine … I have always loved the look of a female butt encased in spandex, which explains why I spent way too much time in roller-skating rinks during the ’80s and why there’s a pair of shiny pants with the crotch cut out in my sex drawer that my wife would only wear for me once.

Or maybe that wasn’t cool to admit.

“Great job!” Rose says. “Who knew you’d be such a natural? Congratulations!”

Indeed, a week later, I discover that bots are automatically spreading a GIF of the video to sites I’ll never get them off. Ever. On the plus side, when I look at in Clips4Sale’s “Wet & Messy” fetish category, “Journalist Gets Creamed” is the top-selling video.